No limit to junket operators in Saipan: Regulator

September 27, 2016
The Commonwealth Casino Commission says there will be no-limit on the number of junket operators allowed to do business in Saipan once the Imperial Pacific Resort and Hotel opens next year. “No number [limit] for the junket operators. The live training facility that currently operates only has five VIP rooms, but when the Grand Mariana […] 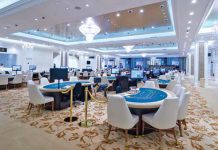