The property opened in 2015 with an investment of more than HK$5 billion. The resort is connected to the Galaxy Macau via an air-conditioned pedestrian bridge. Broadway Macau offers city’s first hawker-style street market with more than 40 local Macau and “first-to-Macau” popular Asian food brands. There is a 3,000-seat Broadway Theatre.As part of Broadway Macau, Broadway Hotel is a riverside hotel that provides five-star comfort and cozy hospitality. Broadway Hotel features 320 rooms and suites. It sits on the Pearl River Delta with views across to Hengquin Island. 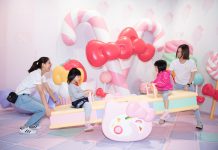 July 25, 2019
In celebration of its 45th anniversary, Galaxy Entertainment is hosting the “Hello Kitty Hello Again” exhibition at Broadway Macau from July 18 to September 1.

January 30, 2018
LED sign products are beginning to dominate the casino landscape, providing versatile digital media for clients, but also resulting in significant cost savings for operators. Casinos are finding that going green can be good for the bottom line.  According to the U.S. Environmental Protection Agency, the Monte Carlo casino in Las Vegas was able to […]

September 6, 2017
Two casinos and one slot parlour remains closed following severe floods caused by Typhoon Hato, according to TDM News. The casinos include Broadway in Cotai and Legend Palace at Fisherman’s Wharf, the latter of which is looking to return to operations before the end of the month. Head of casino operations at Macau Legend Development, […]

August 21, 2017
Galaxy Macau is planning to host a China eSports carnival at the Broadway Theatre on Friday, August 21. “Galaxy Macau • CEC 2017 China E-sports Carnival” is set to be  the city’s first large-scale premium e-sports event. Hosted by the General Administration of Sport of China and the Macau Electronic Competition Association, the event will […]

October 26, 2016
Macau casino operator Galaxy Entertainment Group posted a 28 percent year-on-year rise in net profit in the third quarter of 2016, above analyst expectations. In a filing to the Hong Kong Stock Exchange on Wednesday, the operator said it was “encouraged by the continuing signs of market stabilization.” The company reported profit of HK$2.7 billion […]

March 8, 2016
Galaxy Entertainment Group Ltd chairman, Lui Che-Woo says he will be venturing into family friendly theme parks as part of the next two phases of the HK$86 billion (US$11 billion) Galaxy Macau project, according to an interview with Bloomberg. Lui said the theme park will be “something special and high-tech” similar to the movie “Avatar.” […]

May 28, 2015
Galaxy Entertainment Group delivered a “solid opening” of the $2.7 billion Galaxy Macau phase 2 and Broadway Macau properties, said UBS, with Broadway bringing a unique offering to Cotai. The expansion’s approximately 1580 rooms and 150 incremental tables have been fully operational from day one, with the “quality of the 250 all-suites Ritz…one-notch above the […]

UBS says no clear signs of recovery in May

May 13, 2015
The drop in Macau’s gross gambling revenue is expected to moderate slightly in May, but there are still no clear signs of recovery, UBS analyst Anthony Wong wrote in a note. He said May GGR has been around MOP730 million ($91.4 million), up from MOP690 million and MOP640 million in March and April respectively. However, […]