Grandview Hotel is a four star hotel situated in Taipa, Macau.The hotel has a total floor area of approximately 303,000 square feet and a total of 425 guest rooms. Hotel facilities include the spa, an outdoor swimming pool, the fitness centre, an aerobics room and casino. For food and beverages, the two distinctly decorated Chinese and Western restaurants serve Oriental, Macanese and continental cuisine. There are a total of 21 gaming tables in 1 mass market hall and 1 VIP room, 120 slot machines and 120 live baccarat machines in the gaming area.

November 27, 2017
Kingston Financial Group, which operates the Casa Real Hotel and Grandview Hotel in Macau, saw its profit increase 22 percent to HK$908.9 million (US$116.5 million) for the six months ended September 30, 2017. The increase, it said, was mainly attributed to an increase in income from its margin and IPO financing business. Turnover for the […]

June 30, 2017
Hong Kong-listed investment company Kingston Financial Group Ltd. has posted a 13 percent decline in profit for the year ended March 31, 2017. The group, which is principally engaged in the provision of a wide range of financial services, is also the operator of the Casa Real Hotel and Grandview Hotel in Macau. Kingston posted […] 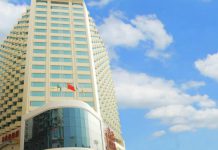 November 28, 2016
Hong Kong-listed investment company Kingston Financial Group Ltd. reported a 19 percent decrease in profit for the six months ended September 30, 2016, due to the decrease in income from securities brokerage, underwriting and placements business. According to a filing on Monday, the company, which owns the Casa Real and Grandview casinos in Macau said […]

June 30, 2016
Investment holding company Kingston Financial Group Ltd has reported a increase in profit of 35 percent for the year ended March 31, 2016, according to a filing to the Hong Kong Stock Exchange. Last week, the operator said it expected a “significant increase” in profit, which was primarily attributable to the increase in income from […]

June 23, 2016
Investment holding company Kingston Financial Group Ltd says it anticipates to report a significant increase in its profit for the year ended March 31, 2016, according to a filing to the Hong Kong Stock Exchange. The company said the increase was primarily attributable to the increase in income from securities brokerage, underwriting and placements, margin […]

November 25, 2015
Kingston Financial, which operates two properties in Macau, reported a steep drop in interim profit from its hotel and gaming business, but said it doesn’t expect the market to deteriorate further in the long run. The Hong Kong-listed company, which is also involved in securities trading and financial services, said revenue from gaming and food […]

May 27, 2015
CY Management Limited, a subsidiary of the CY Foundation and which provides management services to three casinos in Macau, recorded a year-on-year loss of HK$21.6 million ($2.7 million) for the year ended 31 March 2015 due to the significant amortization and depreciation of investment cost.  The company, which provides services namely to Casino VIP Legend, […]