DYNAM JAPAN HOLDINGS Co., Ltd. is principally engaged in the operation of pachinko halls and the provision of services related to the operation. 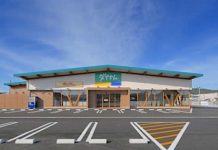 May 29, 2020
Dynam Japan Holdings said it didn’t expect to make a profit in the current quarter after the government ordered the closure of its pachinko parlours in Japan, but does expect to be back in the black for the full financial year, ending March 2021. 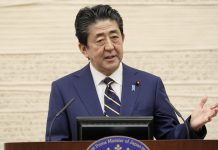 April 8, 2020
The Shinzo Abe government has ordered Covid-19 related state of emergency closures in seven prefectures, including Tokyo and Osaka, which also applies to gaming industries such as pachinko. The directive includes the seven prefectures of Tokyo, Kanagawa, Saitama, Chiba, Osaka, Hyogo, and Fukuoka, all of them major urban areas with large populations. The government is […]

January 6, 2020
In an announcement to the Hong Kong Stock Exchange, pachinko firm Dynam Japan revealed that it had installed ten of its new video slot machines at the Ponte 16 Macau Resort. 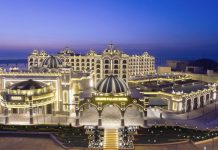 December 1, 2019
Dynam Japan Holdings has announced that it has installed three models of slot machines at the Legend Palace Casino in Macau. 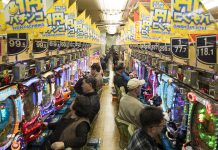 July 29, 2019
Dynam Japan Holdings, the largest pachinko company measured by its number of parlors, reported to the Hong Kong Stock Exchange a 1.2% increase in total revenues in the April-June 2019 period, boosted by its low playing cost halls.

May 27, 2019
Dynam Japan Holdings, the nation’s largest pachinko operator by number of halls, has developed its first slot machine for the Macau market in cooperation with Singapore-based Weike Gaming Technology, but its near-term ambitions appear to be limited.

May 17, 2019
Dynam Japan Holdings has been given approval from the Macau regulator to launch a new slot machine which has been jointly developed with Weike Gaming Technology. The company’s tie-up with Weike was first announced in late March, for a game named Fortune Frogs. Approval from the Gaming Inspection and Coordination Bureau was given on May […]

January 30, 2019
Facing more serious pressure from policymakers and the public in the wake of last year’s legalization of casino gambling, five major pachinko companies came together in Tokyo on Wednesday to show their joint commitment to combating gambling addiction. Top executives of Dynam, Maruhan, Himawari, Niraku, and Yumeya, along with about sixty of their employees, gathered […]

September 26, 2018
The largest pachinko parlor chains have been finding ways to offer support to the victims of the July heavy rains across Western Japan, which took the lives of more than 230 people, especially in Hiroshima and Okayama prefectures. Among the other effects, many local pachinko parlors themselves were damaged in the flooding. Maruhan organized at […]

July 30, 2018
Dynam Japan Holdings, the largest pachinko company measured in terms of its number of halls, reported a 4.1 percent revenue decline in the April-June period as compared to the previous year. High playing cost halls are seeing steeper declines than low playing cost halls. Nevertheless, operating profits were up due to cost-cutting in operating expenses, […]

May 23, 2018
Pachinko hall operator Dynam reported a 13.3 percent increase in its profits before tax as compared to the previous year. Dynam, which operated 450 pachinko halls in Japan by the end of March, is by far the largest single company in the highly decentralized pachinko market, operating almost a 5 percent of the nation’s pachinko […]

January 28, 2018
Dynam Japan Holdings, an operator of Pachinko halls in Japan, reported a slight decline in total revenue for the nine-months ended December 31, 2017. Gross pay-ins for the nine months was JPY 583.8 billion (US$5.4 billion), down 5.2 percent compared to the prior-year period. Total revenue was down 2.6 percent to JPY 115.1 billion. Dynam […] May 25, 2017
Dynam Japan Holdings posted a decline in profit for the year ended March 31, 2017, according to a filing from the company to the Hong Kong Stock Exchange. The pachinko hall operator saw profit of JPY 9.4 billion (US$84.1 million) for the full year, a 11.2 percent year-on-year decrease as compared to 2016. The operator […] April 12, 2017
Japan’s government is unlikely to table a bill to restrict horse racing or its pachinko industry in tandem with regulation to introduce casinos into the country, Union Gaming said in a note. The firm was responding to media speculation that the government would introduce new measures to be seen to be responding to problem gambling. […]

December 5, 2016
Japanese and Macau gaming related stocks on Monday saw an upswing in share price after Japan’s casino bill passed a Lower House committee on Friday, according to media reports. Michael Penn of Shingetsu News Agency speaking to AGB maintains that the LDP and Isshin are still expected to pass the Casino Bill through House of […]

August 1, 2016
Pachinko hall operator Dynam Japan Holdings Ltd reported a small increase in its gaming revenue in 16Q2, totalling Y37.8 billion (US$369.1 million), up 4 percent from the same period in 2015. The company, in a voluntary announcement to the Hong Kong Stock Exchange said that revenue from high playing cost halls decreased slightly by 0.1 […]

Dynam to repurchase up to 10 percent of issued shares November 2, 2015
Dynam Japan Holdings announced that it completed on November 1 the acquisition of Yume Corp, a real estate company which operates nearly 40 pachinko halls in Japan. “All the 38,805,336 Consideration Shares have been issued and allotted to the Target Company’s Shareholders…,” Dynam Japan said in a filing. The number of shares represents approximately 5.22 […]

August 26, 2015
Pachinko hall operator Dynam Japan has entered into an agreement to acquire Yume Corp, a real estate company, which operates nearly 40 pachinko halls in Japan. The acquisition will involve acquiring 100 percent of the entire issued share capital of Yume, which is the holding company of two real estate companies, Japan Real Estate and Pattes […]

July 28, 2015
Dynam Japan Holdings announced total revenue for 15Q2 decreased by approximately 1.3 percent year-on-year to ¥36.3 billion ($5.8 billion) compared with the same period last year and said it will focus more on low playing-cost halls to drive sales. The company announced that its total gross pay-ins went down by 2.8 percent from ¥213 billion […]