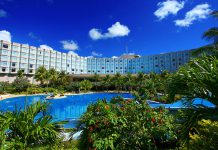 January 17, 2018
The principal owner of Tinian Entertainment Corp. says he is interested in resurrecting the defunct Tinian Dynasty hotel and casino. Tim Chen said he met with Tinian leadership on Friday afternoon following the ribbon-cutting ceremony for Tinian International Airport. During an interview, Chen however admitted that Dynasty’s $75 million obligation to FinCen, imposed for the […]

May 12, 2016
Hong Kong Entertainment, operator of Tinian Dynasty Hotel and Casino has had its casino license canceled, local media reports. Tinian Mayor Joey Patrick San Nicolas said the operator could not meet the standards set by law. With the cancelation, the Municipality of Tinian now has three available casino licenses. The decision was made by the […] 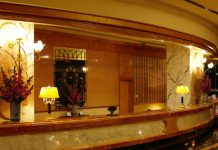 Tinian Dynasty to temporarily shut down due to “slow business”

March 4, 2016
Hong Kong Entertainment owned Tinian Dynasty Hotel and Casino is to temporarily suspend hotel operations due to lack of customers, according to Tinian Mayor Joey Patrick San Nicolas as quoted by Marianas Variety. “The reason is lack of customers as there have been cancellations of flights,” said San Nicolas. The casino hotel is planning to […]

January 22, 2016
Hong Kong Entertainment Investments Ltd, owner of Tinian Dynasty has had their petition for bankruptcy dismissed, and had all other pending motions filed in the case rendered moot, local media reports. The decision was made by U.S. Bankruptcy Judge Robert J. Faris after conducting a hearing via video teleconference between assistant U.S. Trustee Curtis Ching, […]