Manila Jockey Club, Inc. (MJC) was incorporated on March 22, 1937, and was granted a congressional franchise on November 23, 1997, to operate and maintain a racetrack and conduct horse races. The Company is also engaged in the development and sale of condominium units and residential properties and lease of an office building through joint venture agreements with property developers.MJC also ventured into gaming operations with the establishment of a casino known as the Pagcor Club San Lazaro located at the 3rd floor of the Turf Club Building at the San Lazaro Leisure Park in Carmona, Cavite. The Company conducts its races two days every week on an alternating schedule with the other racing clubs. The Company also has off track betting (OTB) stations where the betting public may place bets outside the race track on the horse races. As of December 31, 2015, the Company has a total of 255 OTB stations, 43 of which are located in provincial areas.The Company holds 100 percent interest in SLLP Holdings, Inc. (SLLPHI); San Lazaro Resources and Development Corporation (SLRDC); MJC Forex Corporation; Gametime Sports & Technologies, Inc.; New Victor Technology, Ltd.; and Manila Cockers Club, Inc. (MCC). In 2015, the Company incorporated a new wholly-owned subsidiary, Hi-tech Harvest Limited (HHL), in Hong Kong which primary purpose is to market and advertise the cockfighting operations of MCC. As of December 31, 2015, HHL has not yet started commercial operations.MJC also owns 33.33 percent interest in Techsystems, Inc. and 22.31 percent interest in MJC Investment Corporation.

Alfonso R. Reyno, Jr., serves as chairman of the board and chief executive officer of Manila Jockey Club Inc since September 17, 2012. 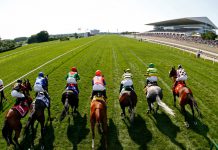 August 23, 2018
Manila Jockey Club (MJC) reported a net loss of P77.3 million (US$1.4 million) for the six months ended June 30, 2018, according to a company filing to the Philippine Stock Exchange on Wednesday. The narrowed loss was due to a 28.8 percent year-on-year increase in revenue during the period, reaching P390.3 million – with revenues […]

February 26, 2017
Winford Hotel & Casino, located at the San Lazaro Tourism and Business Park in Sta. Cruz, Manila, is planning to hold its grand opening in April, according to The Inquirer. The P7 billion (US$139.5 million) hotel-casino, operated by an affiliate of the Manila Jockey Club, has been partially opened since its ceremonial opening in January. […]