The Star Gold Coast, formerley known as Jupiters Hotel & Casino, is a hotel casino run by The Star Entertainment Group.Located in Gold Coast in Queensland, Australia, the casino hotel includes a world-class hotel with the excitement of award-winning restaurants, lively bars, spectacular stage shows and concerts, plus the non-stop action of a 24-hour casino. Located moments from the bustling Broadbeach precinct, the casino hotel has been part of the local Gold Coast community for 30 years.The seven acre complex includes eight bars, seven restaurants, conference facilities, a ballroom, theatre, health spa, gym, and a monorail which connects the property to the Oasis Shopping Centre across the road. The hotel, with 592 rooms, stands 66 metres (216 feet) and has 21 floors.A new six-star luxury hotel will also open before the Gold Coast 2018 Commonwealth Games and approvals have been received for an additional 200-metre hotel and apartment tower.The complex is governed under the Jupiters Casino Agreement Act. 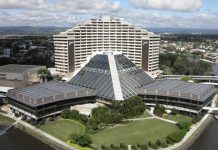