Not only Goa, but also the state of Sikkim, the small, mountainous Indian state wedged between Nepal and Bhutan, has gone under Covid-19 lockdown, including the closure of all casinos.

Sikkim Chief Minister Prem Singh Tamang announced on Monday that entry of all domestic tourists has been banned. He also stated that all educational institutions, discos, cinemas, gyms, and casinos must remain shut until April 15.

The chief minister also urged local residents to avoid venturing outside of the state except under emergency conditions.

Delta Corp, which operates its casinos in both Goa and Sikkim, has seen its stock prices tumble, with a nearly 10 percent drop on Wednesday alone. On January 13 its stock price peaked at INR206.75, but by Wednesday’s closing had fallen to INR70.2, representing a 66 percent decrease.

With 156 confirmed coronavirus infections and three deaths, India has so far not been among the most hard-hit nations, but the authorities are concerned that the situation could rapidly deteriorate. 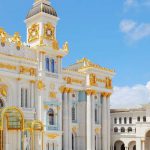